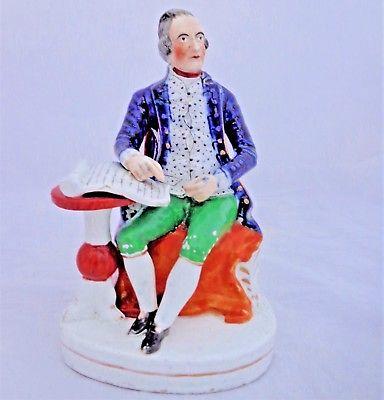 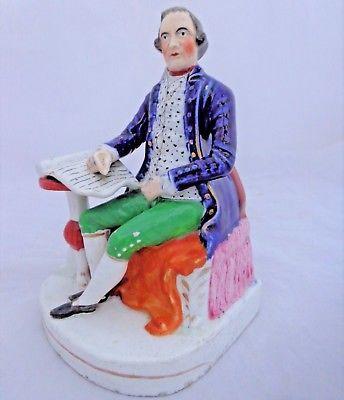 Here we have a superb, rare and highly collectable Victorian Staffordshire figure of the famous Naval explorer Captain James Cook.

This beautifully modelled figure believed to have been produced by the Alpha factory (1840 -1853) shows Cook seated on a chair consulting documents on a round topped table at his side. The figure has been hand coloured and he sports a cobalt blue frock coat and green breeches. Other colours used are orange, iron red, pink and black. His waistcoat is decorated with small black dots and there are gilded highlights picking out his coat buttons and gaiters for example.

Captain Cook (1728 -1779) was a British explorer, navigator, cartographer and Captain in the Royal Navy. He made detailed maps of Newfoundland prior to making three voyages to the Pacific during which he achieved the first recorded European contact with the eastern coastline of Australia and the Hawaiian Islands and the first recorded circumnavigation of New Zealand. Cook was attacked and killed in 1779 during his third exploratory voyage in the Pacific while attempting to kidnap a Hawaiian chief in order to reclaim a stolen cutter.

The figure stands 7 1/4 inches high and the base is 5 inches wide. It weighs 652g unpacked. It is in good condition with a slightly warped, so can rock slightly on the base, a little paint flaking and it has been broken at the neck, travelling round to the shoulder and re-glued back in place.

This is a great item for any collector or rare Staffordshire portrait figures or Cook related pieces.

Free international postage with this item.