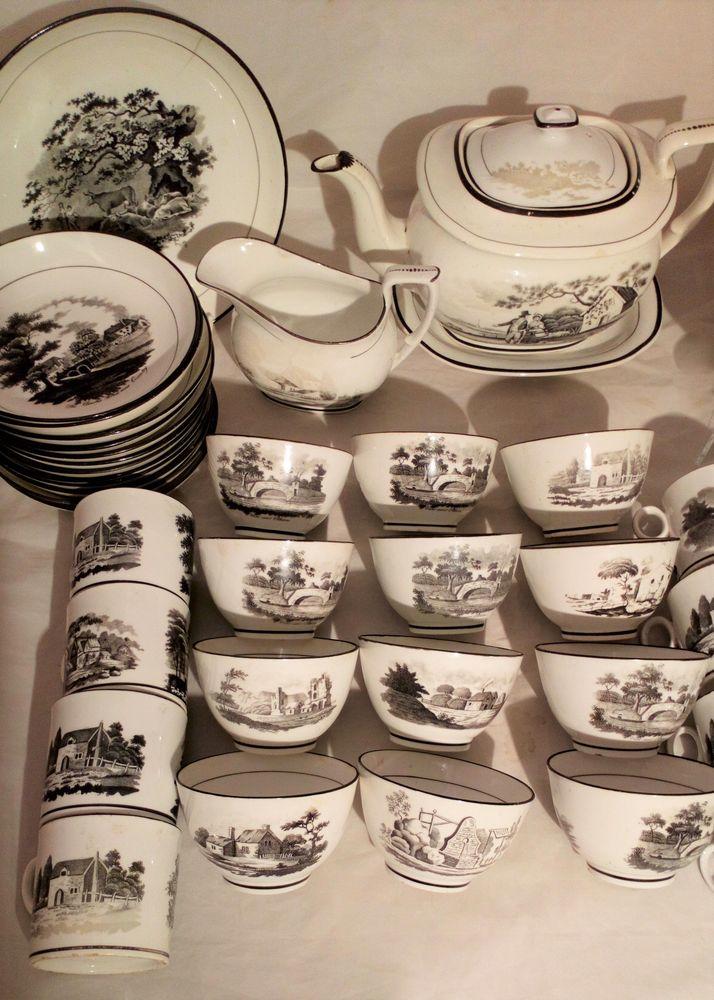 A rare antique bat printed full tea and coffee service made by the New Hall porcelain company and decorated in pattern number 1063. The design consists of a number of different rural landscape scenes, some including country houses, all printed in black with hand painted black enamel decoration. The tea set is made in hard paste porcelain in the London shape, with plain sided tea bowls, straight sided ring handled coffee cans and deep saucers, all dating from around 1815.  Each item has two different scenes with the exception of the flatware.

This service has no makers mark although some of the larger items have the pattern number 1063 in black enamel underneath. This pattern number and the scenes are known to be made by the New Hall Porcelain company of Shelton, Staffordshire, England. George III was the monarch, with the Prince Regent being on the throne, at the time this tea set was made at the start of the nineteenth century in the middle of the Regency period.

The teapot is in the London shape that was popular from 1812 until about 1825. The teapot has no pouring guard, a plain spout,a 7 shaped handle and a nine hole lozenge shaped strainer. The creamer is also in the London shape. The tea bowls are Bute shaped without handles. The coffee cans are cylindrical straight sided with ring handles.

Some of the bat printed scenes are named, they are as follows:

Worfield Grove: or Warfield Grove also known as Warfield House, which is near Bracknell in Berkshire, the home of Admiral Sir George Bowyer and, later, the political writer, Sir John Hippisley.  There are three saucers in this pattern

Cuffnells: or Cuffnalls was a country house estate on the outskirts of Lyndhurst in the New Forest, Hampshire. It was the house of George Rose who was the MP for Lymington and Christchurch and the Joint-secretary to the Treasury and eventually President of the Board of Trade. Rose was closely associated with William Pitt (the Younger), and was visited at Cuffnells by both the Prime Minister and King George III. One saucer in this pattern

Brough Hall, near Richmond, North Yorkshire. One saucer in this pattern

St Alban's: St Albans Cathedral, officially the Cathedral and Abbey Church of St Alban in St Albans, Hertfordshire, England. Four saucers in this pattern and on the teapot stand.

The Charter House near Coventry ; also known as St. Anne's Priory, Coventry on London Road, Coventry, in the West Midlands of England. Two saucers in this pattern

Woburn Abbey: is a country house, the family seat of the Duke of Bedford. It is to the east of the village of Woburn, Bedfordshire, England. Three saucers in this pattern and three coffee cans.

View near Eltham: Eltham a district of southeast London, England, within the Royal Borough of Greenwich. On six of the tea bowls.

Ugbrooke House is a stately home in the parish of Chudleigh, Devon, England, situated in a valley between Exeter and Newton Abbot. It is the seat of the Clifford family, Baron Clifford of Chudleigh. This print is on one coffee can.

Brecknock: A view of Brecon Castle with the old bridge, in Brecknock in Powys, South Wales,  based on the drawing and engraving by Mrs Lathbury and J. Smith, respectively, originally published in John Britton & Edward W. Brayley's The Beauties of England and Wales (London: Vernor & Hood, 1801-1815). On one side of the teapot.

Winstone Cottage on the other side of the teapot.

Upton, unsure on this one there are a number of Uptons in the UK. On one saucer.

Two milkmaids and cows lying under a tree, on the two saucer dishes. There are approximately a further twenty five different unnamed rural landscape scenes including fishing, farming and ruined buildings.

All items are decorated with bat printing, which was a method of transfer printing using a gelatinous glue pad or bat as opposed to tissue paper, a process that was short lived from around 1800 until 1820. This method used stipple engraving on the copper plates rather than line engraving it enabled the scenes to be depicted with shading with a greater tonal range that enabled softer more atmospheric landscapes like these to be produced.