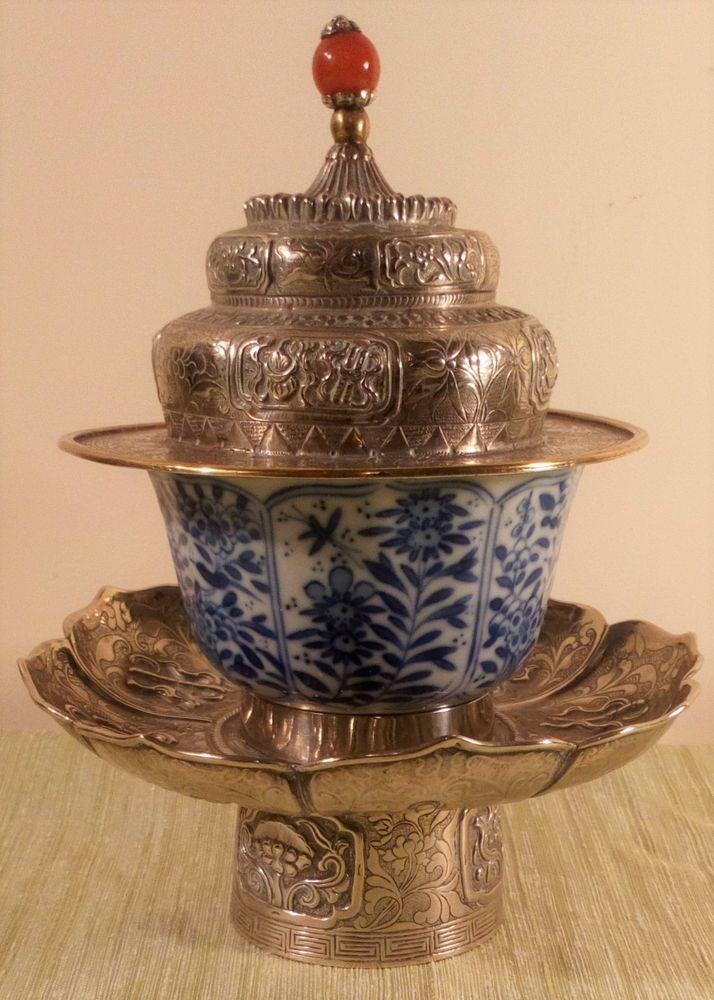 An antique Chinese Kangxi blue and white porcelain tea bowl with an antique Tibetan embossed and chased white metal stand and cover. Such cups and covers were used in Tibet by senior monks (Lamas) and aristocratic families usually for drinking tea. Some collectors may possibly refer to this item as a Dhakya set.

The porcelain tea bowl is lotus panel shaped and decorated with under-glaze cobalt blue floral and insect decoration in six lotus panels around the out side. These panels follow the shape of the lotus edge rim. Internally there are individual flowers and a swagged double line border all around a central individual flower. The base has double line rings and a central artemesia leaf mark. The tea bowl is from the reign of the Chinese emperor  Kangxi ( 康熙 1654-1722) period in the Qing dynasty 清代.

The stand or base is of stemmed form with the tapered cylindrical foot being chased with three rectangular shaped cartouches filled with flowers and surrounded by a scrolling floral design. The open lotus flower shaped "saucer" is inset onto the tapered stem with the scalloped rim made to look like lotus petals. The "saucer" is repoussed and chased with eight Himalayan Buddhistic symbols against a scrolled leafy background. The symbols include the sword of Lu Dongbin, the flute of Han Xiangzi, the fan of Zhungli Quan, the gourd of Li Tiequai,

The bowl cover or lid has also been copiously covered with engraved and repousse work and is formed in three tiers the top surmounted with a coral-coloured glass bead handle or knob. The two lower tiers each have rectangular shaped cartouches similar to those on the base, the lower one having four cartouches each with two different Buddhist emblems. The middle tier has flowers in the cartouches and the third or top tier is decorated with a ribbed medallion and surmounted with the knob.

The stand and lid are  made of a white metal, some kind of alloy, possibly a low grade silver alloy. It is more likely to be Paktong or baitong 白銅 "white copper" Nickel silver or more accurately cupro-nickel

This silver coloured alloy cup stand and cover was made in Tibet probably in the nineteenth century, although the style pre-dates that. The porcelain cup was made in China and is much earlier in date so may have been "married" to the stand in the past.