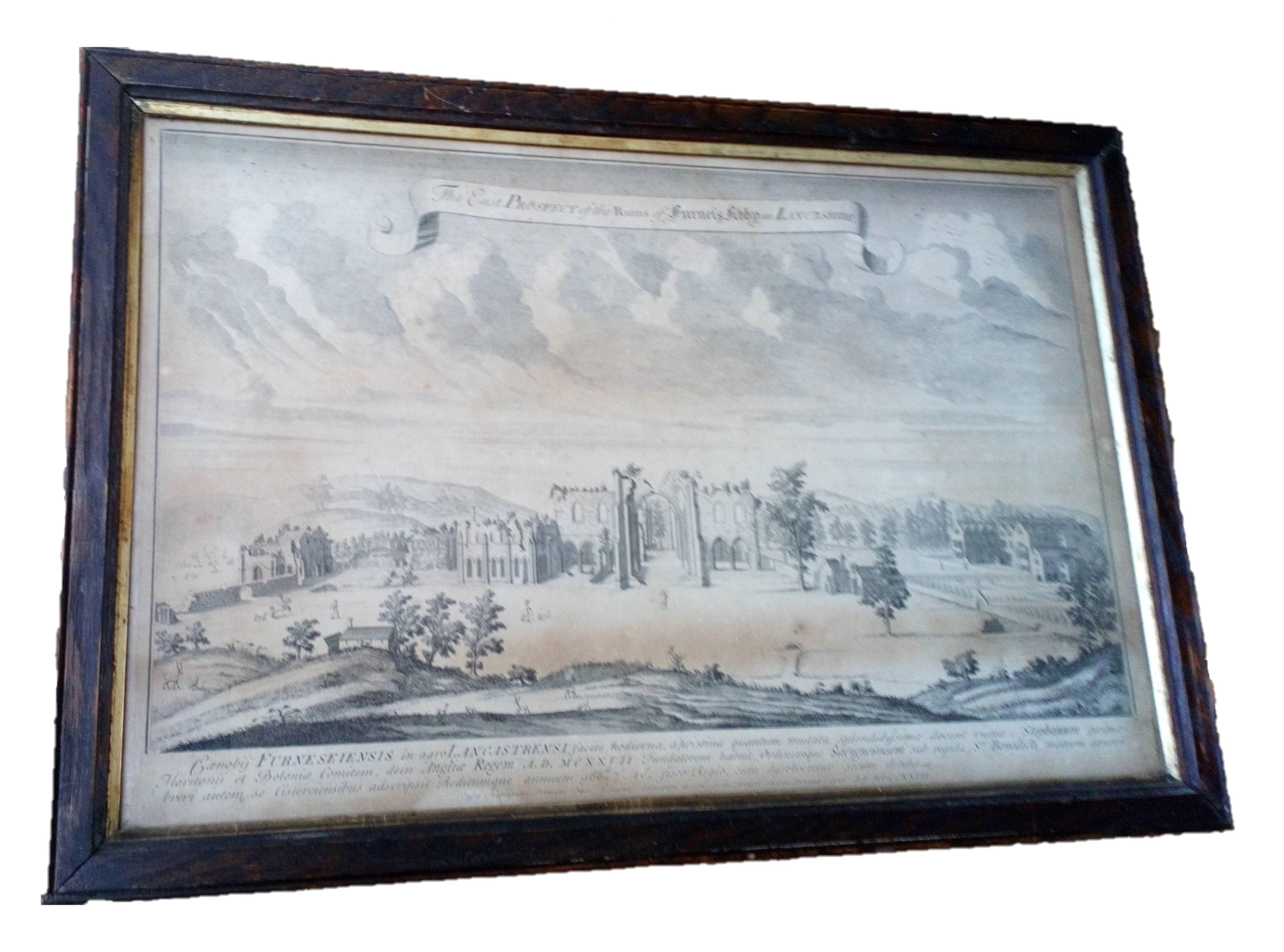 An antiquarian print of Furness Abbey, or St. Mary of Furness, a former Catholic Cistercian monastery located to the north of the essentially Victorian developed town of Barrow-in-Furness, now in Cumbria, was Lancashire (North of the Sands) in England. The abbey dates back to 1123 and was once the second-wealthiest and most powerful Cistercian monastery in the country, behind Fountains Abbey, prior to its dissolution during the English Reformation. This interesting, relatively rare print dated 1727 was engraved by George Vertue for the Vetusta Monumenta (Ancient Monuments) compiled by the Society for Antiquaries of London where it forms plate 1.27: The Ruins of Furness Abbey. It is particularly interesting with the depiction of the Manor house which became the Furness Abbey Hotel next to the Furness Abbey Railway station. Most of the building was demolished in 1954 due to damage incurred during WW2.

It is in good antique condition there is some discolouration or tanning. It still displays well. Please see the images. A rare opportunity to purchase such an interesting and historical print.

The following information describing the scene and translating the Latin inscription is an extract from the excellent website VETUSTA MONUMENTA: ANCIENT MONUMENTS, A DIGITAL EDITION by Noah Heringman and others in the The Scalar team, University of Missouri:

The print shows the ruins of the east front of the abbey church at Furness, Lancashire, together with the chapter house immediately to the south (left) and the infirmary chapel (far left). Founded in 1127 on this site, now known as Barrow-in-Furness, Cumbria, this Cistercian abbey—the second-wealthiest in England after Fountains Abbey—was suppressed by Henry VIII on 9 April 1537. Construction of the presbytery and crossing was complete by 1170 and the nave was complete by 1200. Work on the east front and west tower continued intermittently through the fifteenth century. The church roof and windows were dismantled within three months (Wood 2008, 10) and eventually Thomas Preston purchased the property from the Crown. It remained in the Preston family until 1756, when it was inherited by Lord George Augustus Cavendish (d. 1794), who is credited with the earliest efforts to preserve the abbey ruins (West 1774, 262-63). A stone buttress supporting the north transept dates from his tenure; iron and concrete reinforcement was added beginning in 1884 (Wood 2008, 24); and a major structural stabilization was carried out by the Office of Works beginning in 1923 when the state acquired the property from the Cavendish family. Among other changes over time, the print shows an arched roof on the now roofless rear portion of the chapel and shows the second story of the chapter house in a more complete state (only the middle section of the upper story remains).

Banner: The East PROSPECT of the Ruins of Furness Abby in LANCASHIRE.

Translation: The contemporary appearance of Furness Abbey in the county of Lancaster. The most splendid ruins show how much the Abbey has changed from its original condition. It was founded in 1127 by Stephen, first the count of Boulogne and of Mortain [Normandy], later King of England. The Abbey recognized the Order of Savigny under the rule of St. Benedict. Shortly thereafter, however, they ascribed themselves to the Cistercians. When it was dissolved, the Abbey handed over its property along with its annual revenues of £966. 7s. 10d to the Royal Exchequer. In 1727 AD, the Society of Antiquaries of London had engraved in copper the drawing made by order of the Most Noble Prince the Duke of Montague.