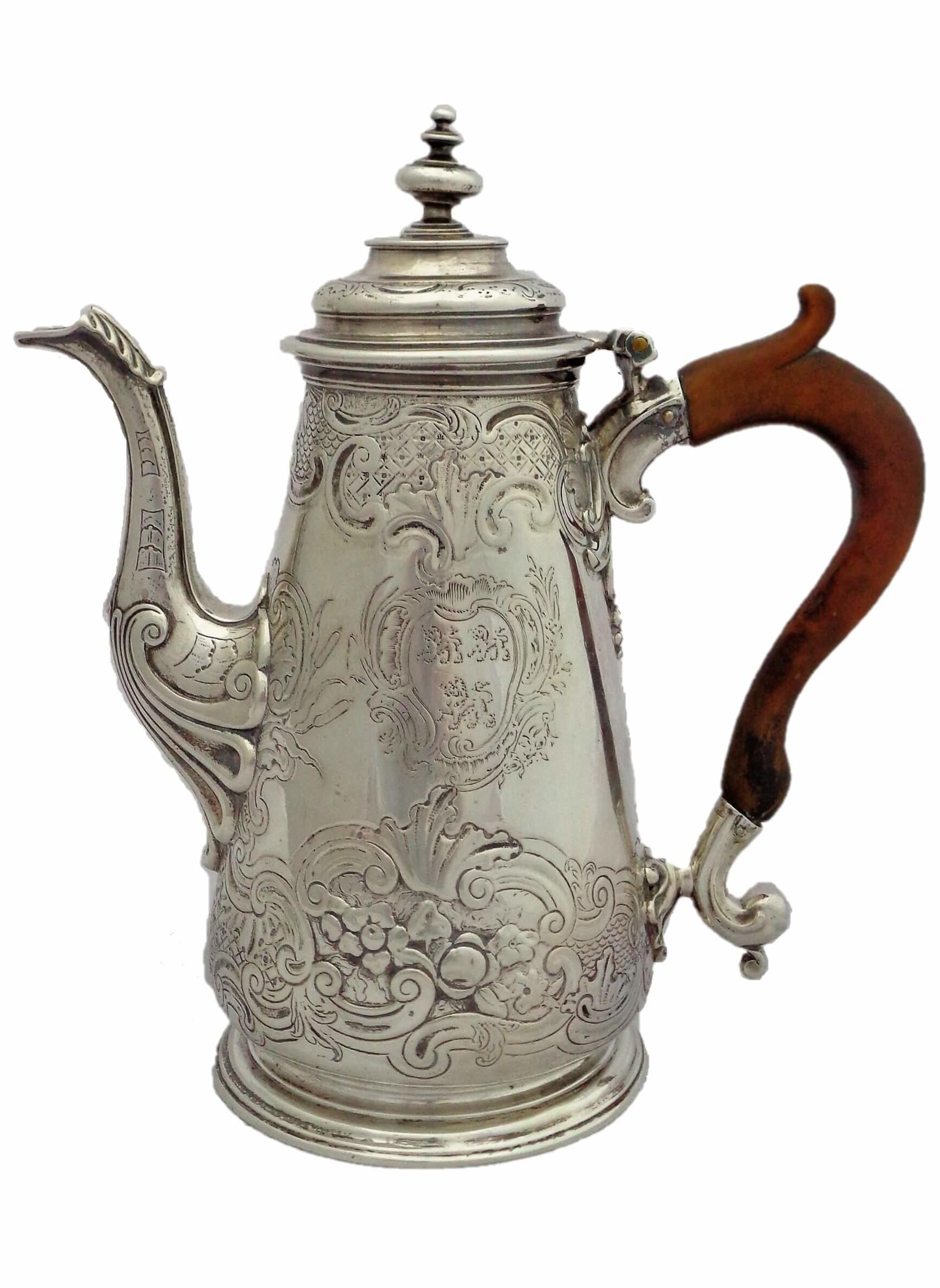 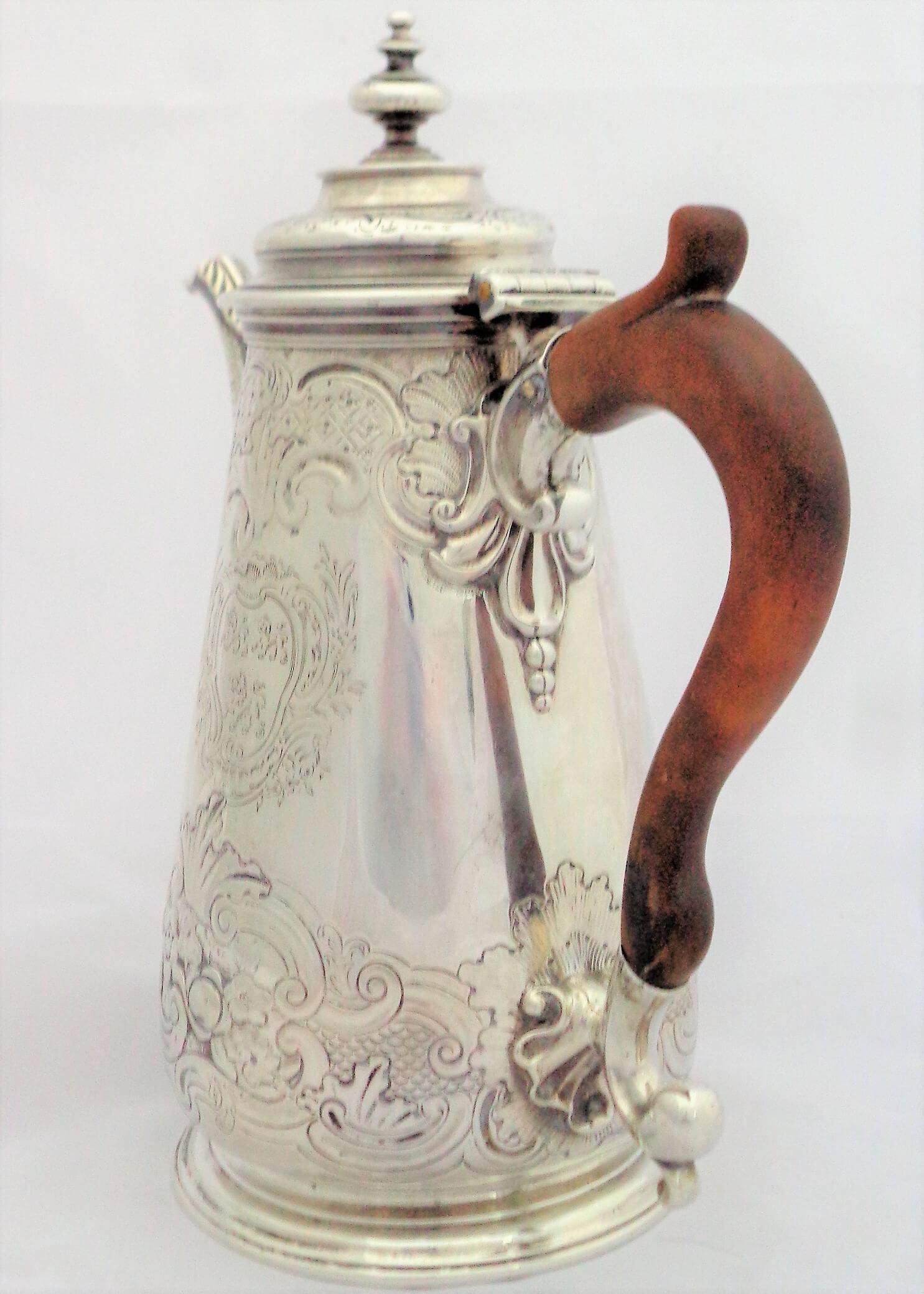 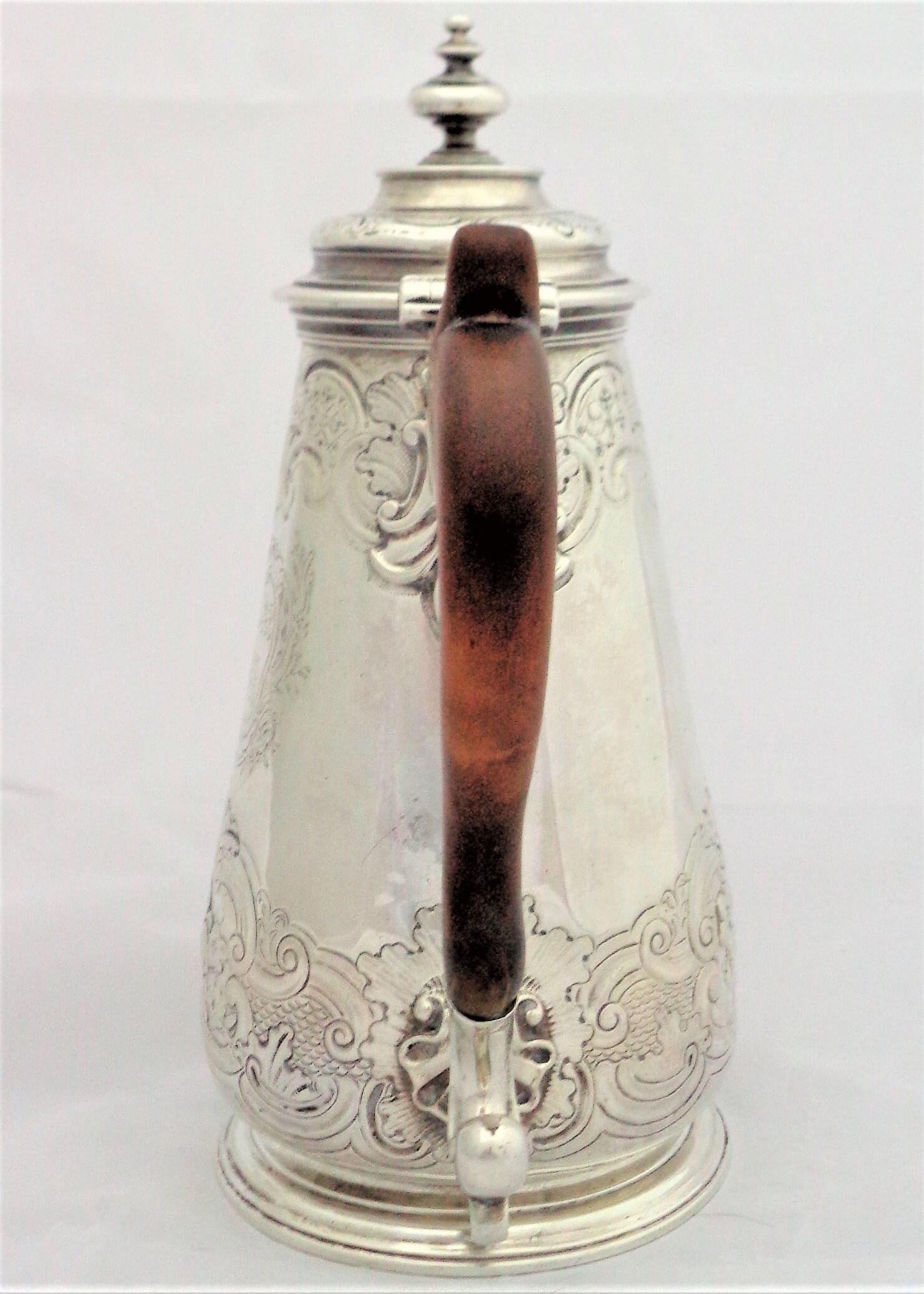 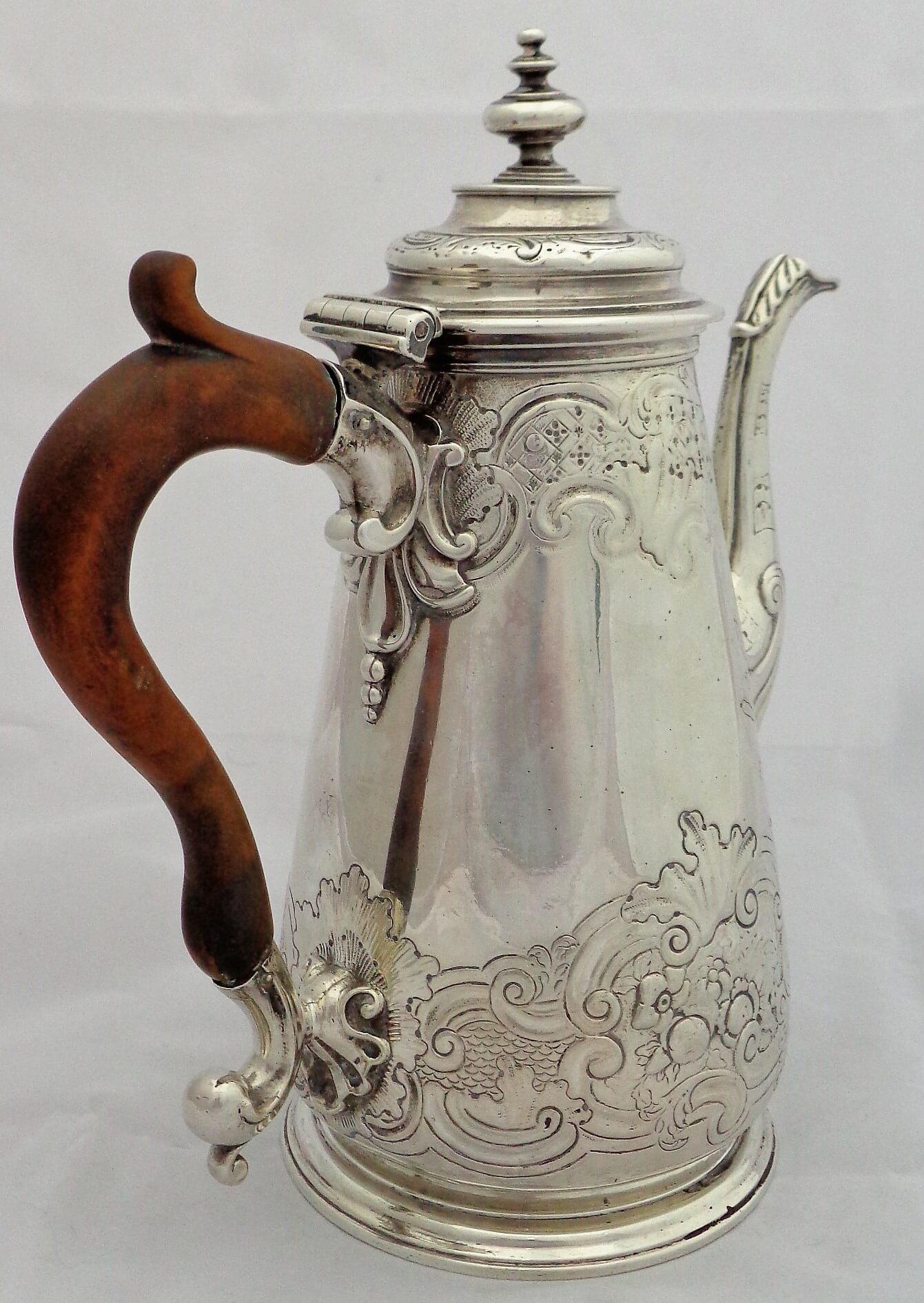 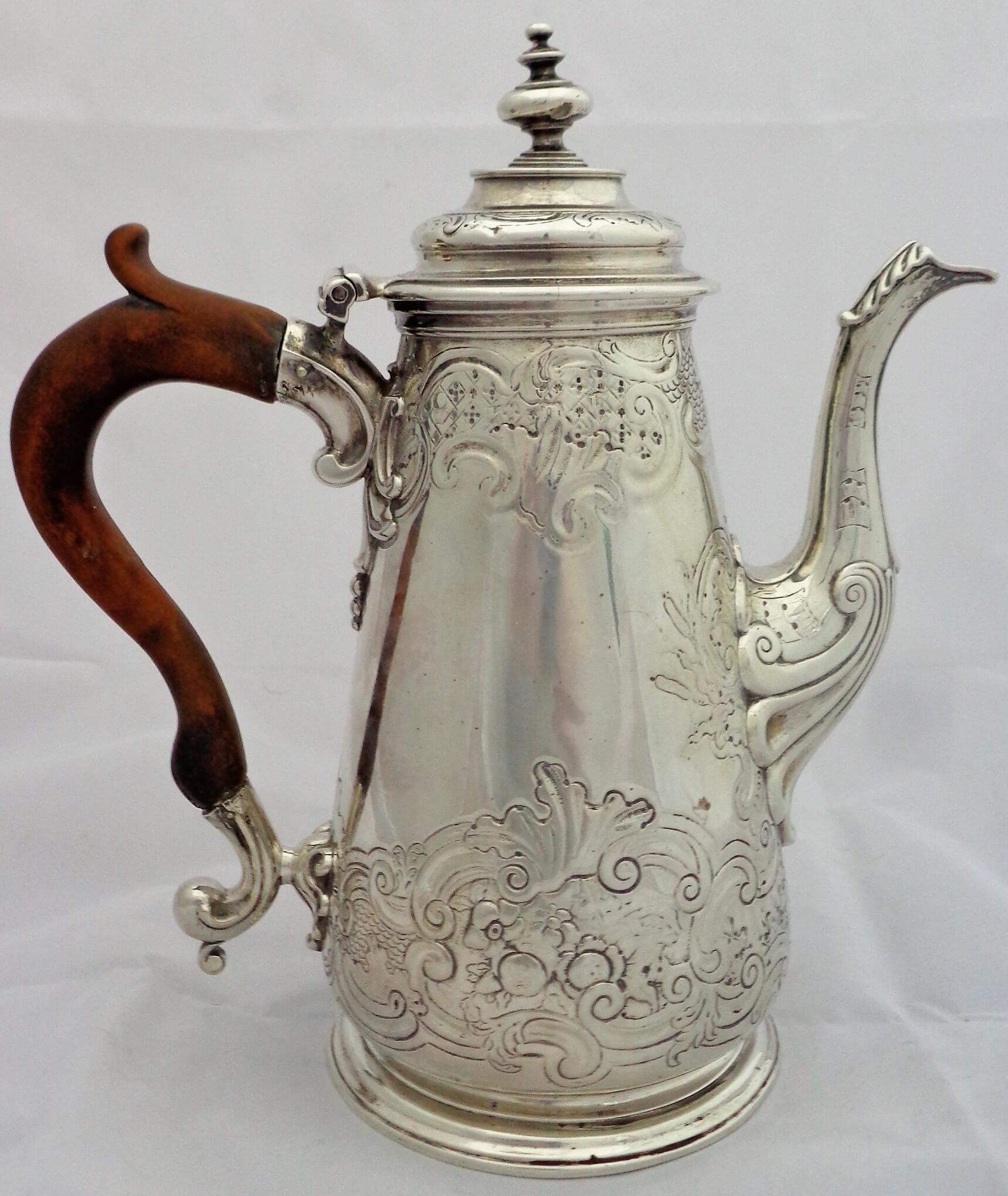 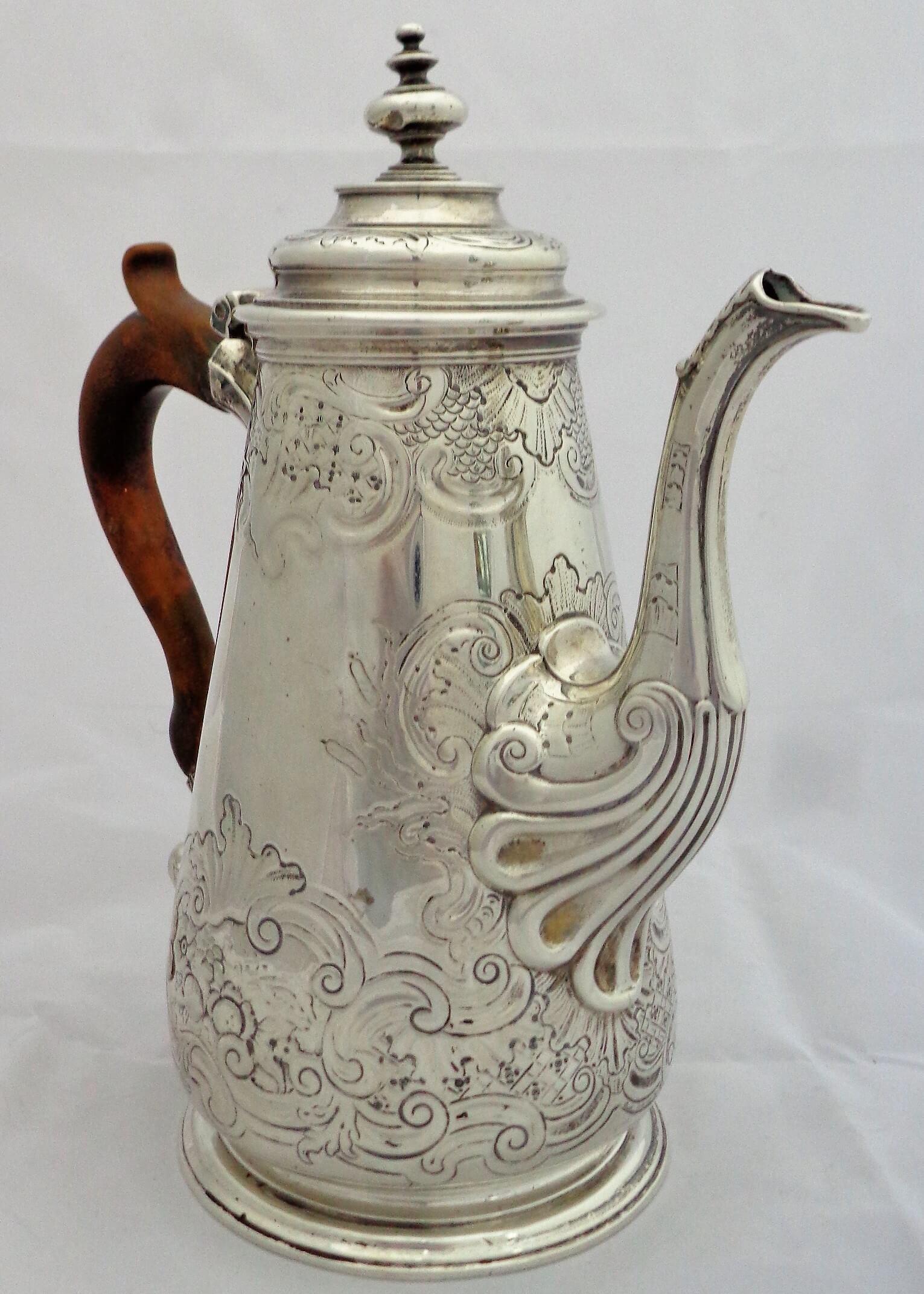 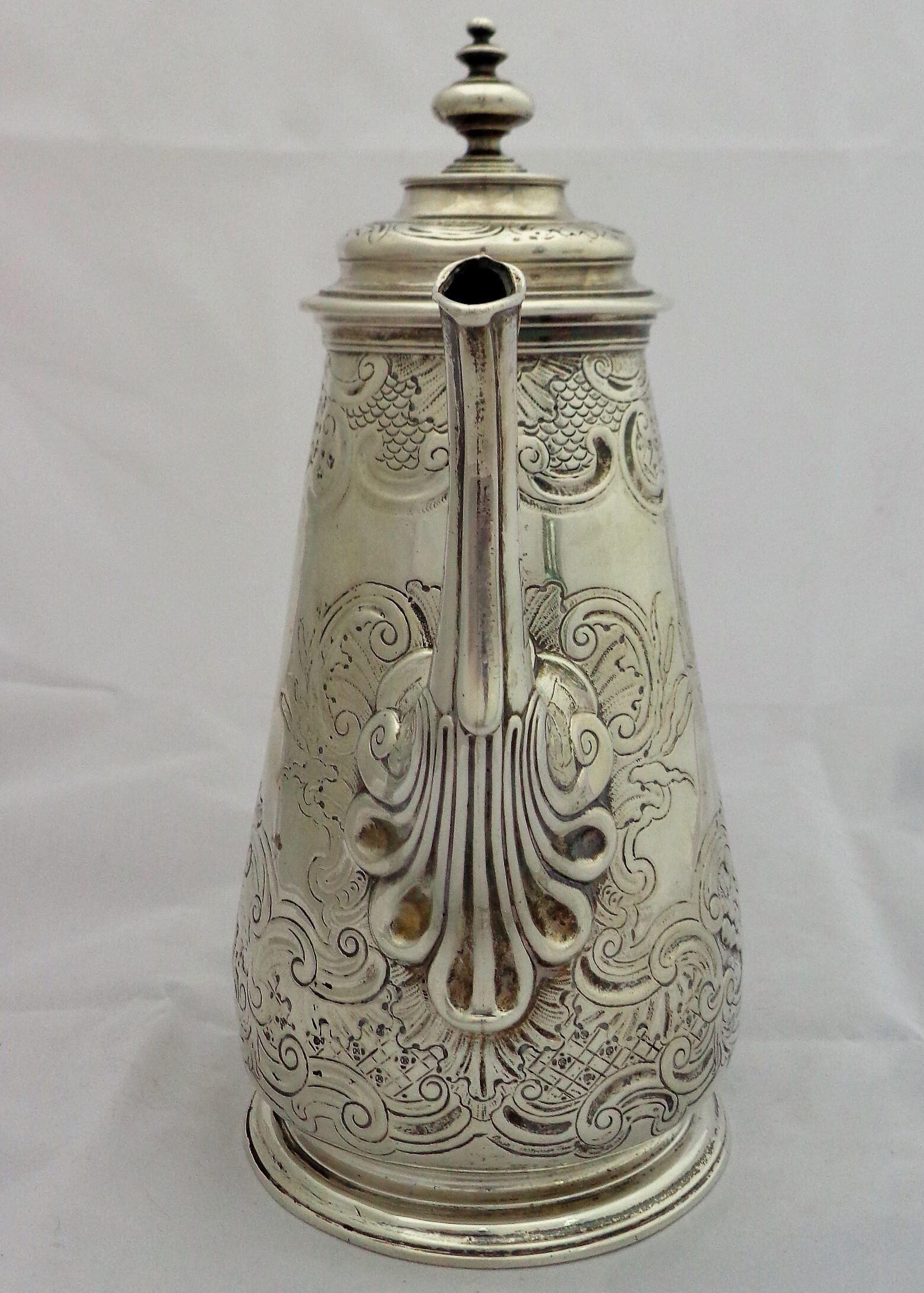 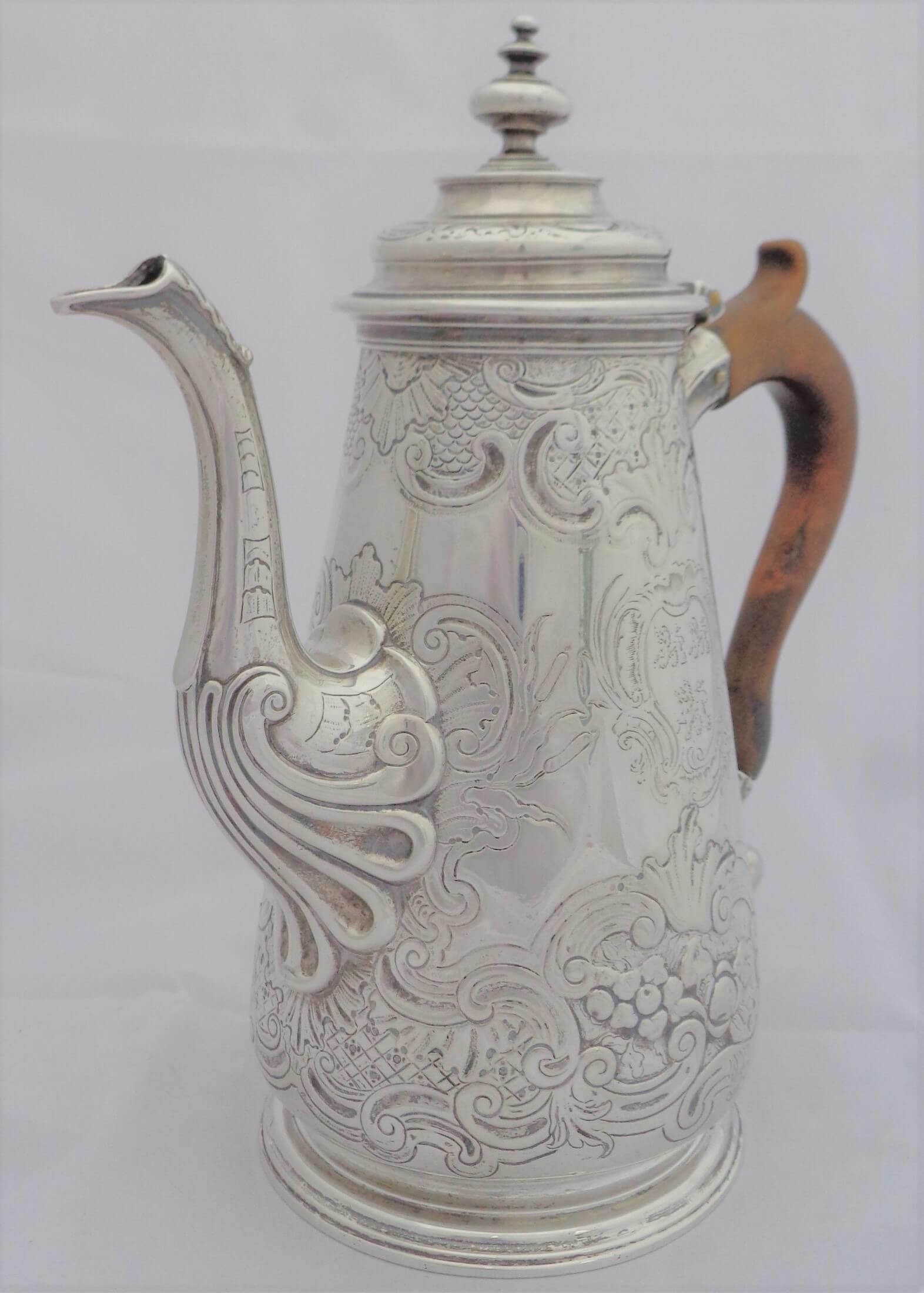 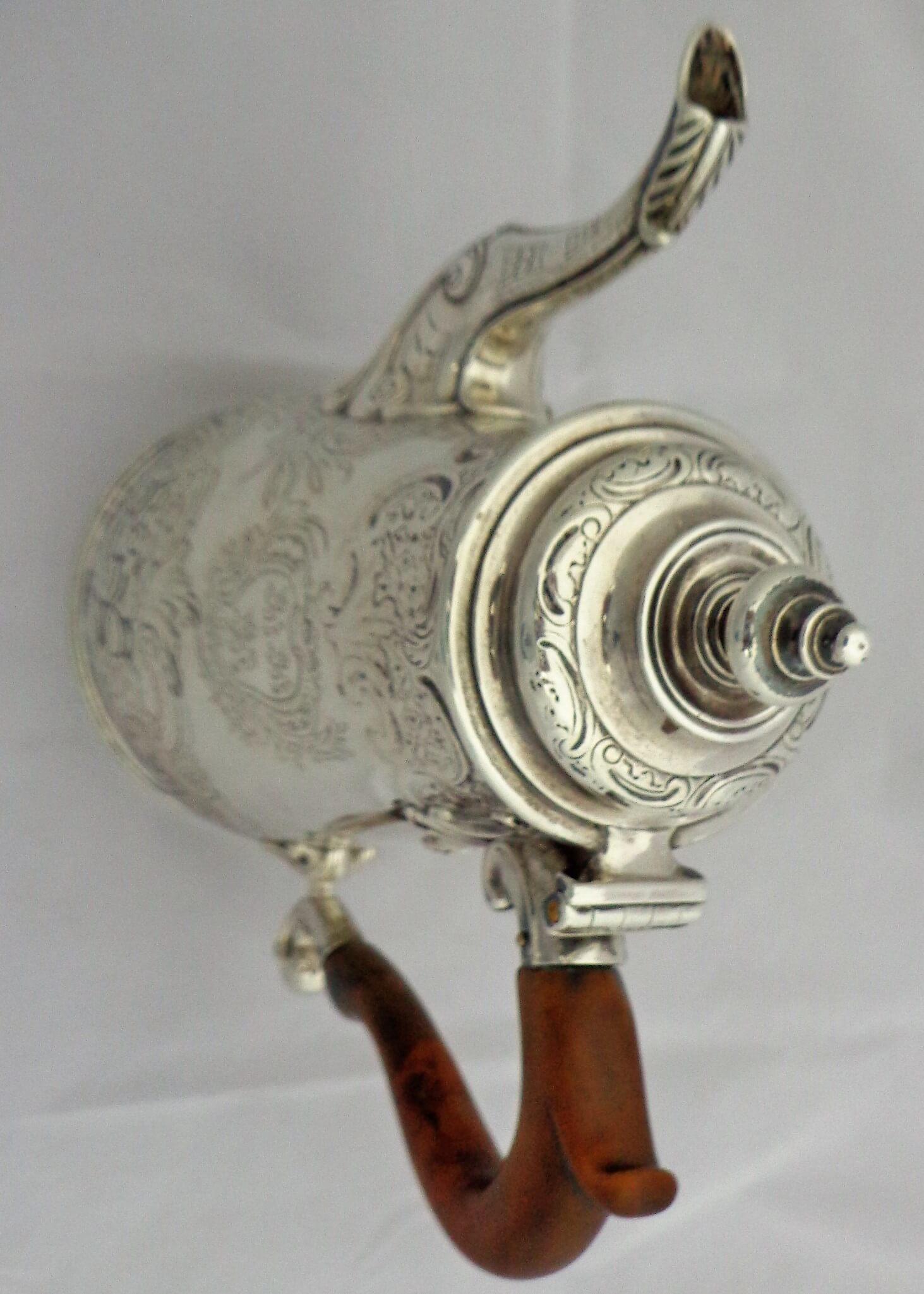 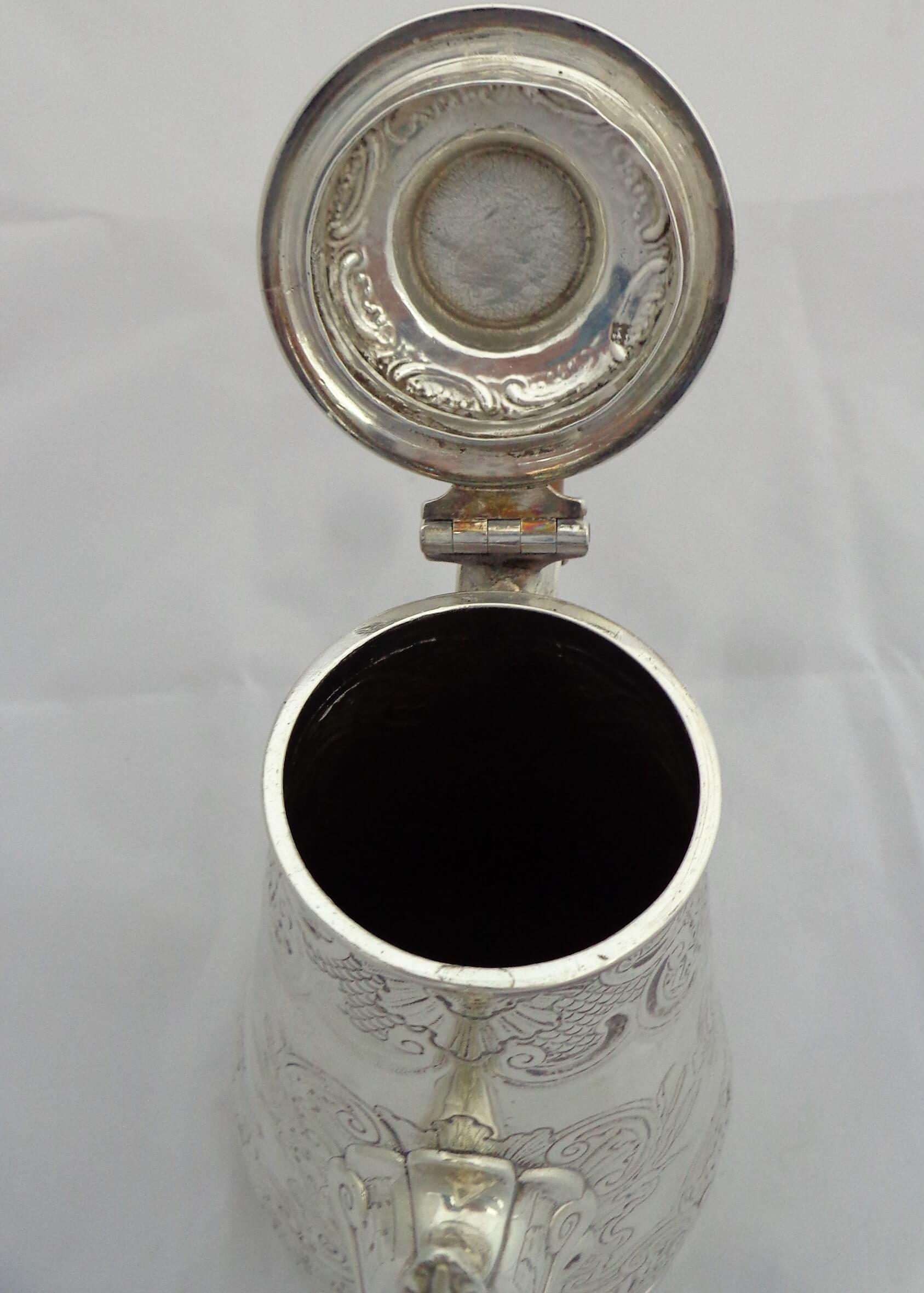 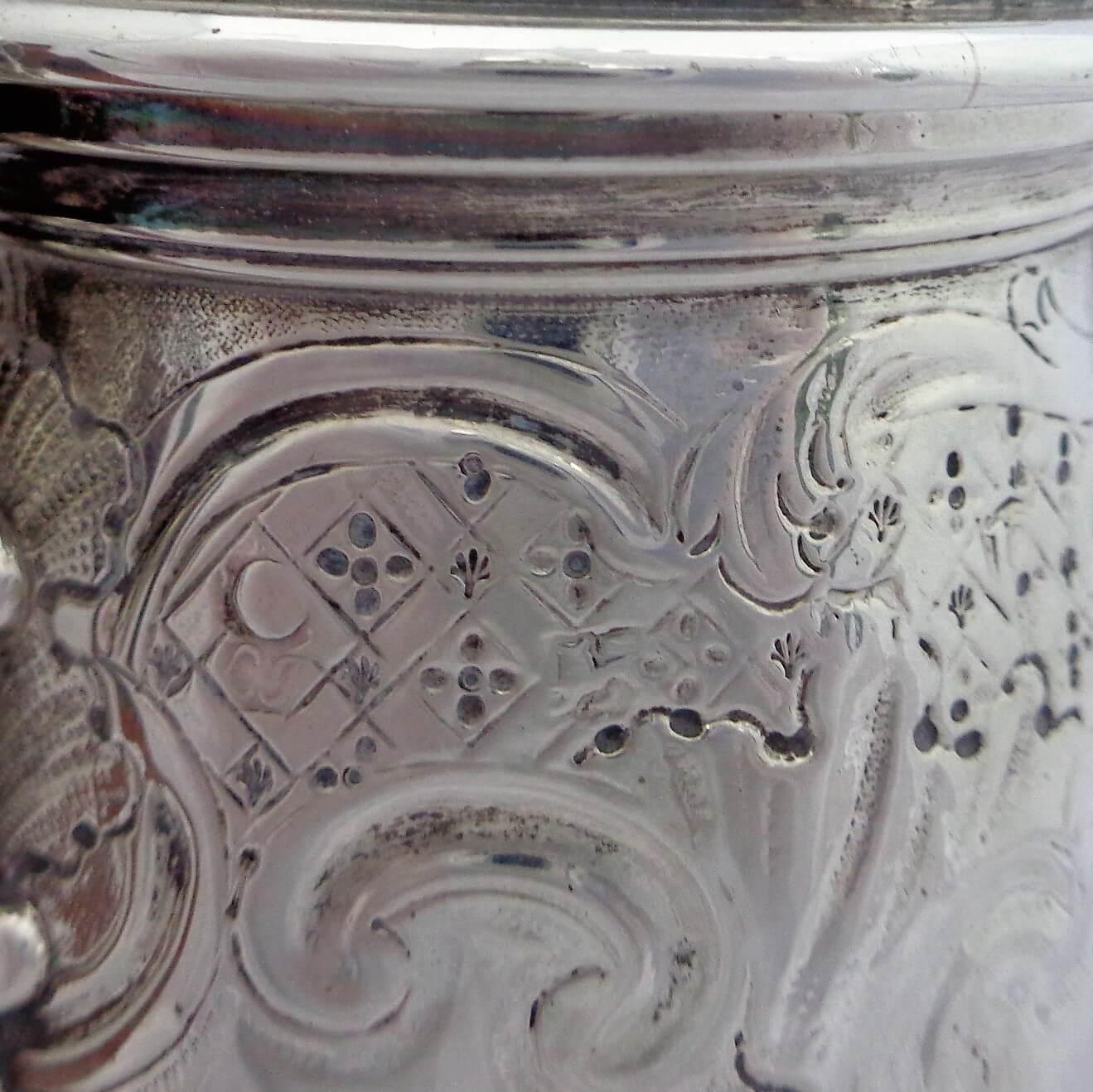 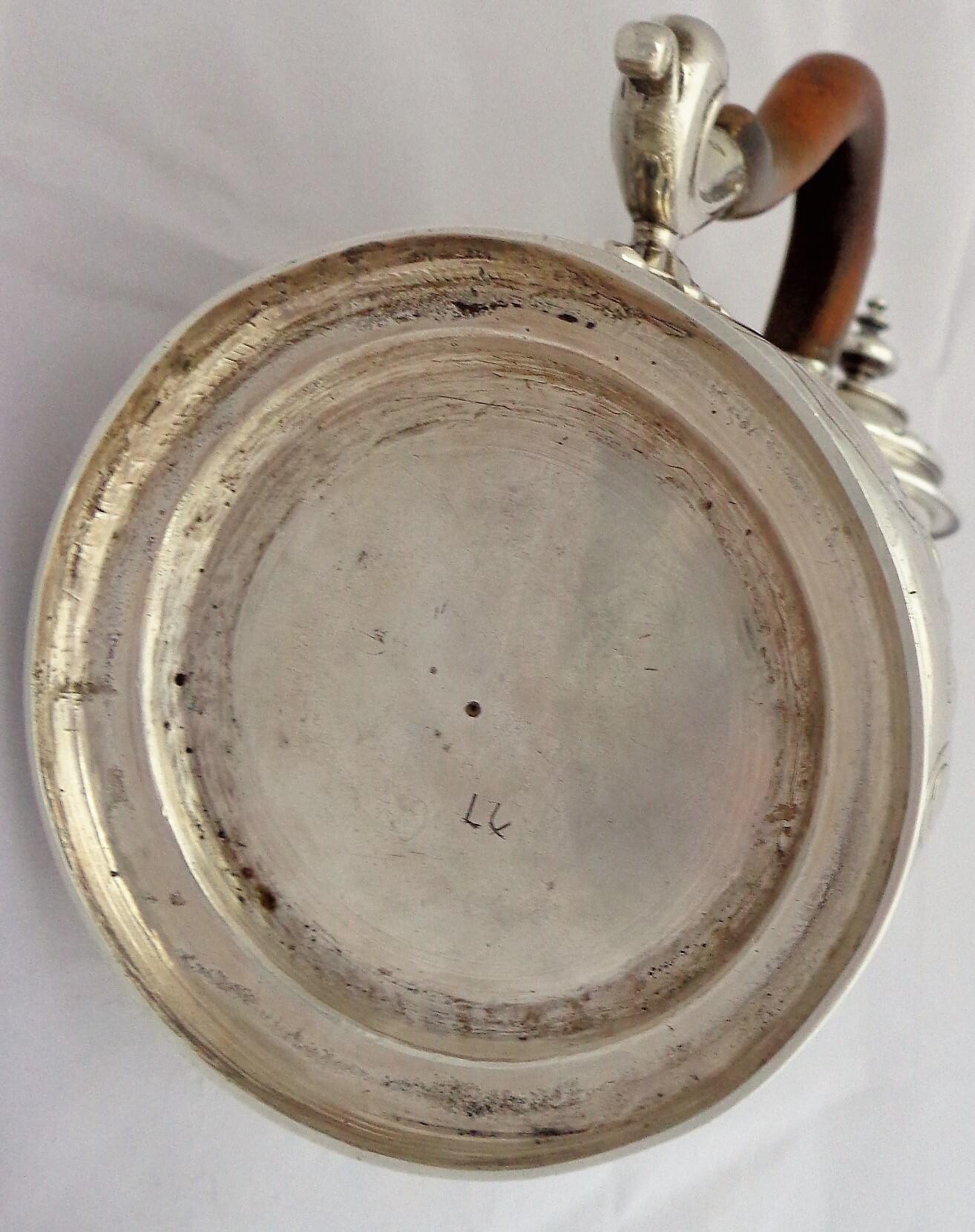 A very usable Georgian Sterling silver coffee pot that was originally a chocolate pot, the removable central top "stirring" lid finial has been soldered into place, evidence of which can be seen in the images. The pot is of a footed tapering cylindrical form with a central cartouche with a family crest with three lions passant, unusually two smaller over one larger. The rococo repousse floral scroll decoration we believe to be also a later "improvement" also slightly obscures the hallmarks and also the tip to the the base of the crest. It was probably done at the same time as the soldering of the double lid in the change from a chocolate pot to a coffee pot.

The marks are the Leopard's head crowned for London, the lion passant for Sterling standard silver, a lower case "p" for 1750-1751, makers marks C R for Paul Crespin, see page 50 of Jackson's Hallmarks pocket edition. The lid also has the lion passant mark in the shaped shield mark for the period.

Jackson's Hallmarks state that "Paul Crespin is an highly important maker and a serious rival to Paul de Lamerie, certainly his equal. Paul Crespin" (1694 -1770) a silversmith born and brought up in England from a family of Huguenot refugees. Crespin was one of a number of other Huguenot goldsmiths and silversmiths, including Paul De Lamerie, who in 1726 between them provided a large dinner service to the Empress Catherine I of Russia. Crespins's contribution to the service was a large two-handled hand-chased cup and cover which is on display in the Hermitage Museum, in St. Petersburg.

Crespin produced some of his finest work in the 1730s and 1740s, he produced pieces for a number of peers of the Realm including the Dukes of Portland, Somerset, and Devonshire, and the Earls of Rockingham and Albemarle. Importantly for Crespin in 1741 he received his most illustrious commission from Frederick, Prince of Wales, for a nautical themed table centrepiece weighing over 1,000 troy ounces which is still in the Royal collection at Windsor Castle.

He had an affinity for the French Regence style as can be seen in the scroll on the spout and on the handle terminals. One of his earliest surviving pieces an octagonal casket, from 1720, was hand-chased all over in the Regence style, and many of his later Rococo pieces reflected this earlier work.  His later pieces were more commercial, including small domestic items such as salvers, dishes, and baskets, they were all still of the highest quality, and his legacy to the goldsmiths and silversmiths trade in England should not be under-estimated. He retired from trade to Southampton with his wife in In 1759, where he died on 25 January 1770.

Crespin was a neighbour and friend of the silver smith Nicholas Sprimont who was the driving force in the Chelsea Porcelain factory. See the excellent article in the English Ceramic Circle Transactions by Sally Kevill-Davies Volume 31 page 106 which also includes an image of the portrait of Crespin in the Victoria and Albert Museum.

The crest which is possibly for the family names of Carew or Gifford or Giffard. Each of these family names have three lions passant within their crests and are connected to the Norman invasion of England by William the conqueror (Duke of Normandy). There are similarities to the Royal Arms of England or the blazon of the Arms of Plantagenet which is: Gules, three lions passant guardant in pale or armed and langued azure signifying three identical gold lions (also known as leopards)  walking past but facing the observer, arranged in a column on a red background. Alternatively the arms of Henry Tyerman [Tyreman, Tireman] (1603-1672), draper, Lord Mayor of York 1668-1669 has three lions passant , two in chief and one in the base, although his crest has a cheveron.

Condition: Excellent antique condition and in very usable condition, a couple of very minor marks commensurate with age and use. The knop has a slight rearward lean and a small dent to the lower right side.  Has been changed from a chocolate pot. Please see the images. Serving coffee from this would be a delight. 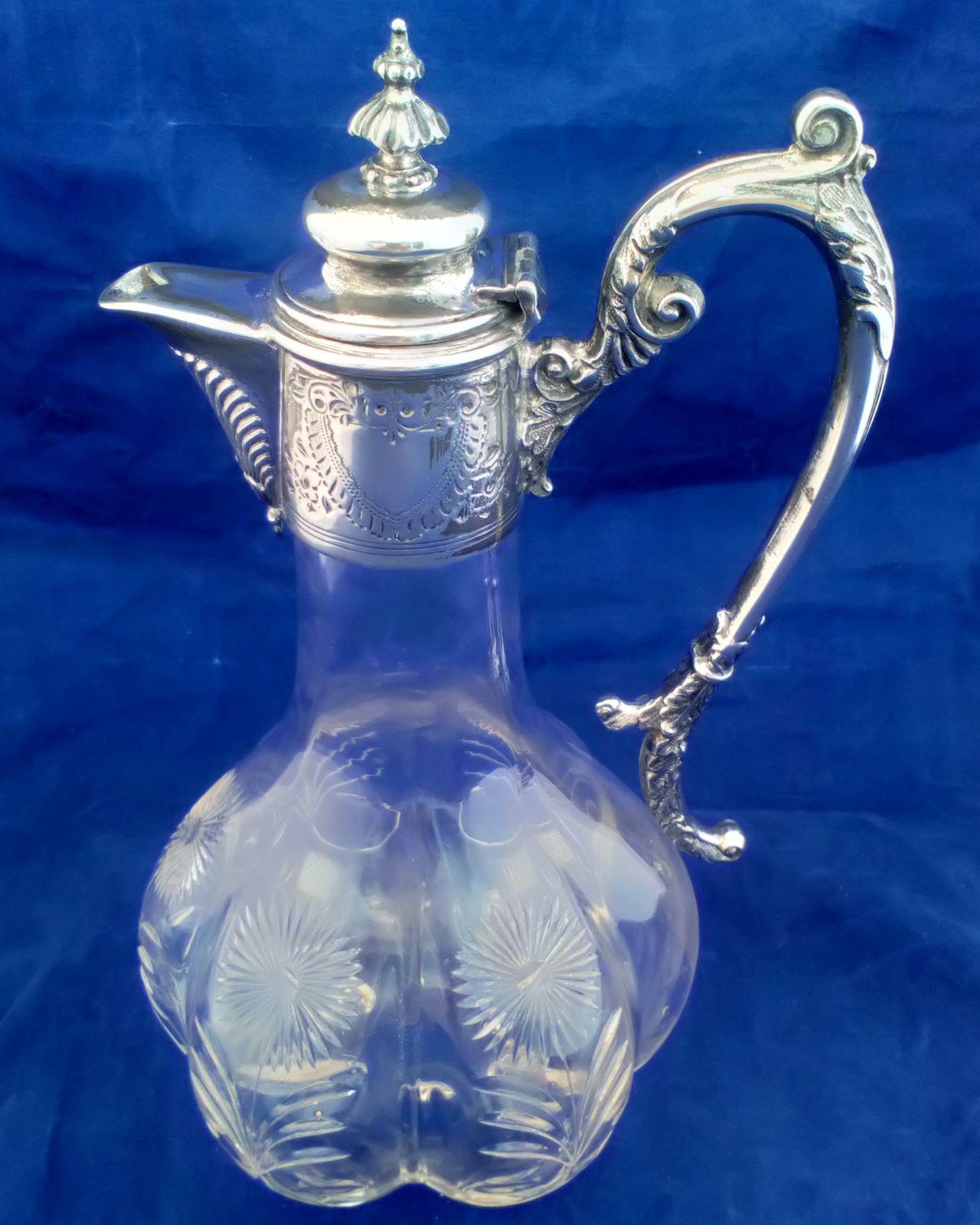 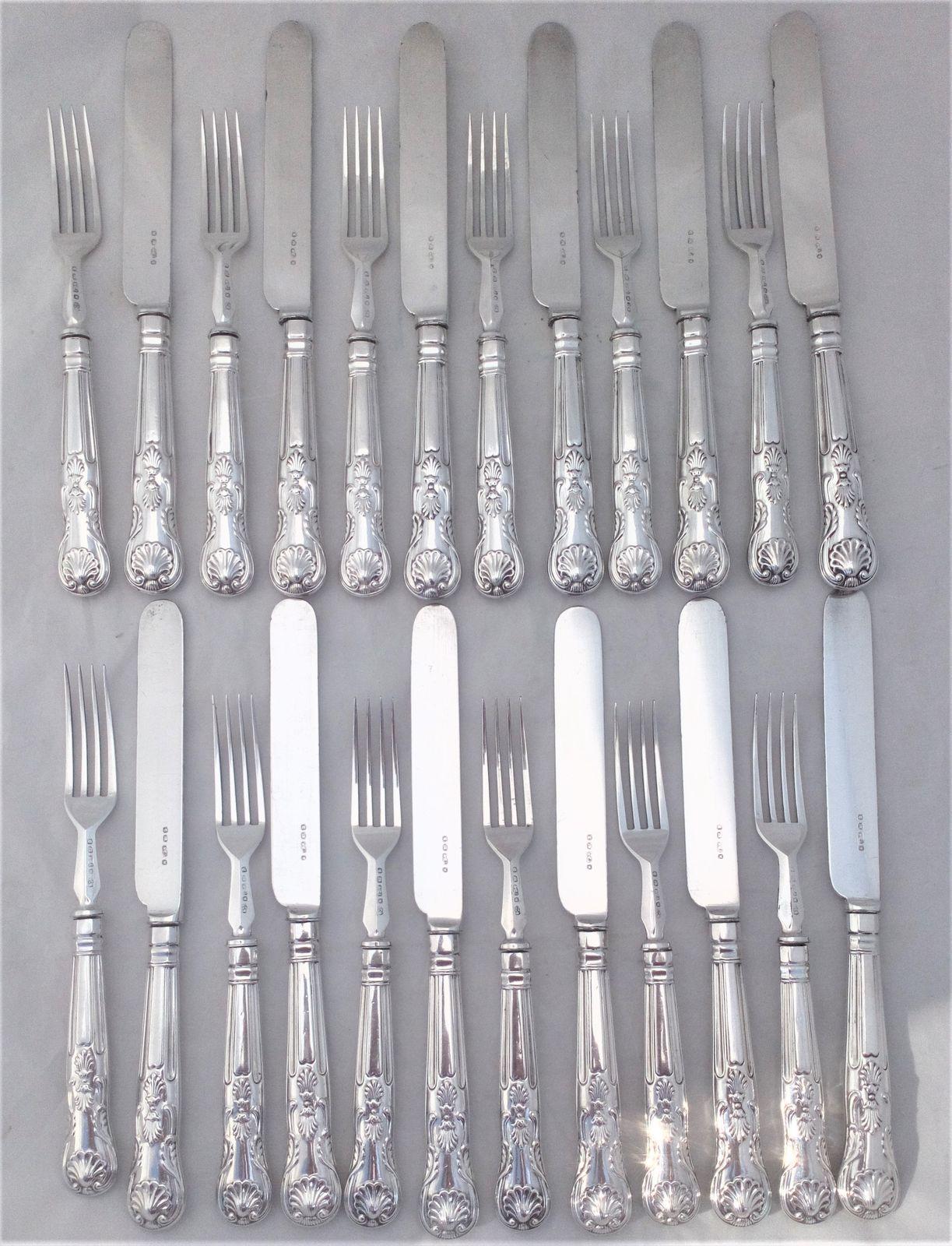 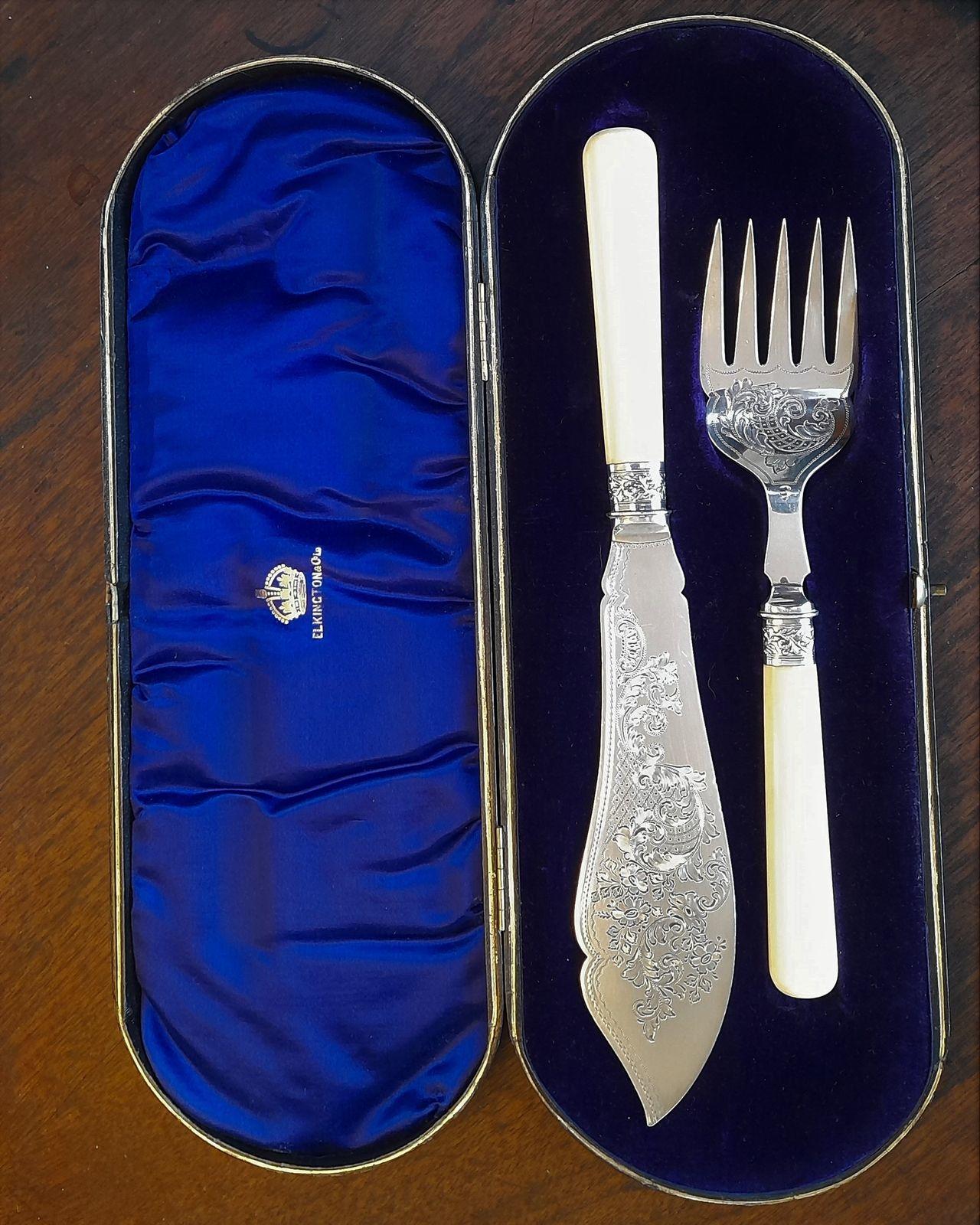 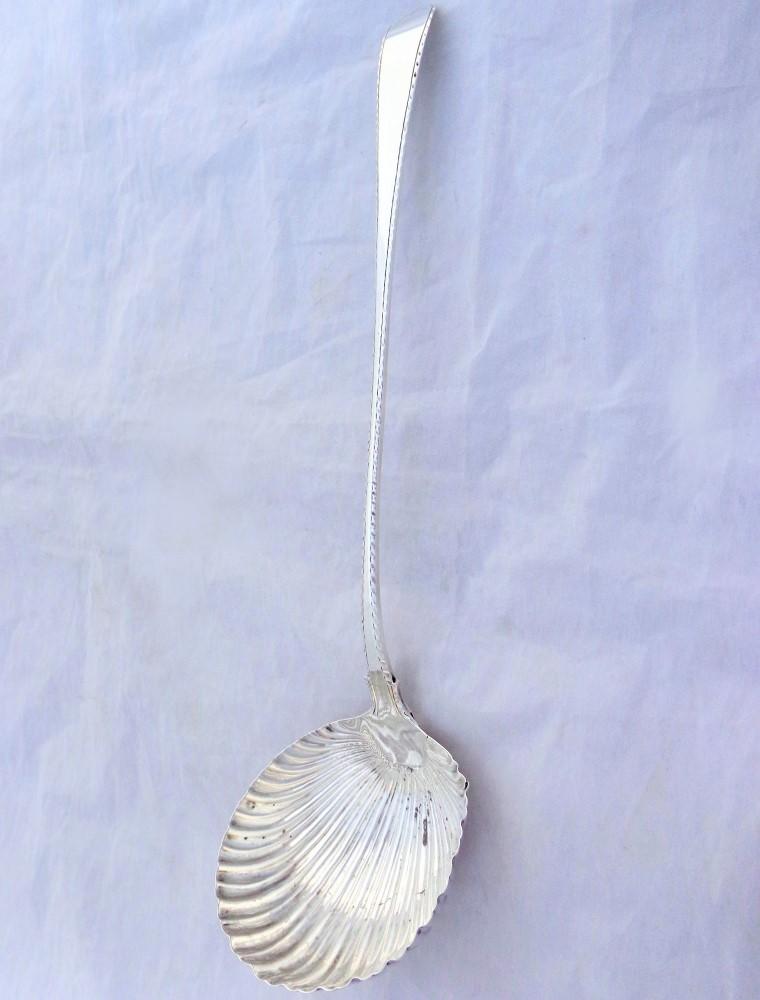 £250.00
A beautiful antique Georgian Sterling silver shell shaped bowl soup ladle with a handle in the old English pattern with a feather edge and a plain ter...
View details
X
This website uses cookies to ensure that you get the best experience on our website. Read our privacy policy.
I accept