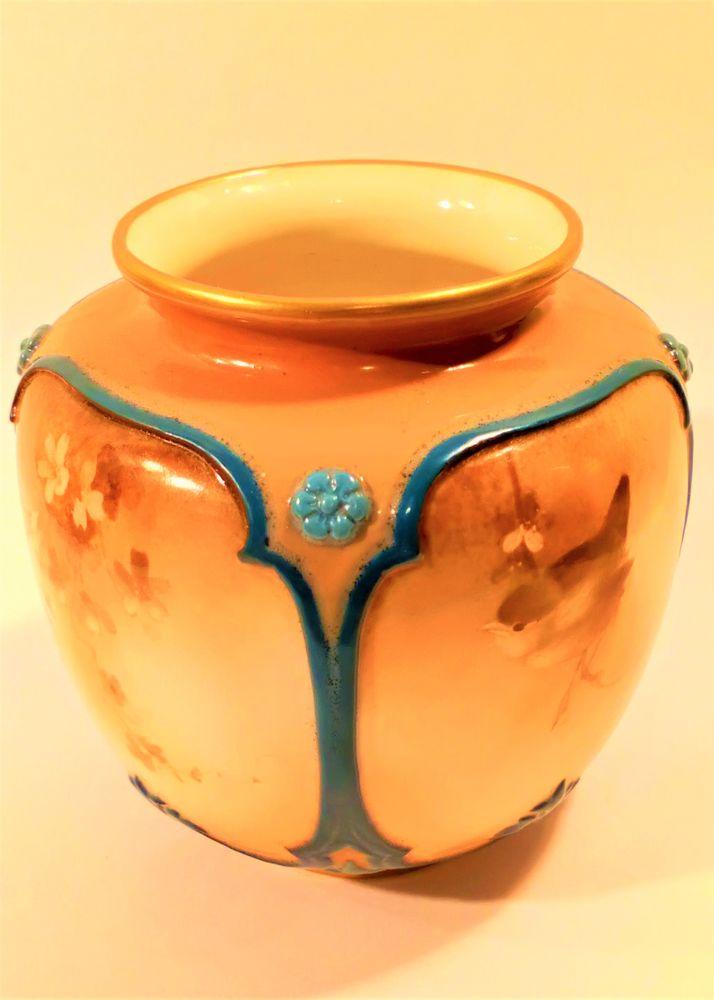 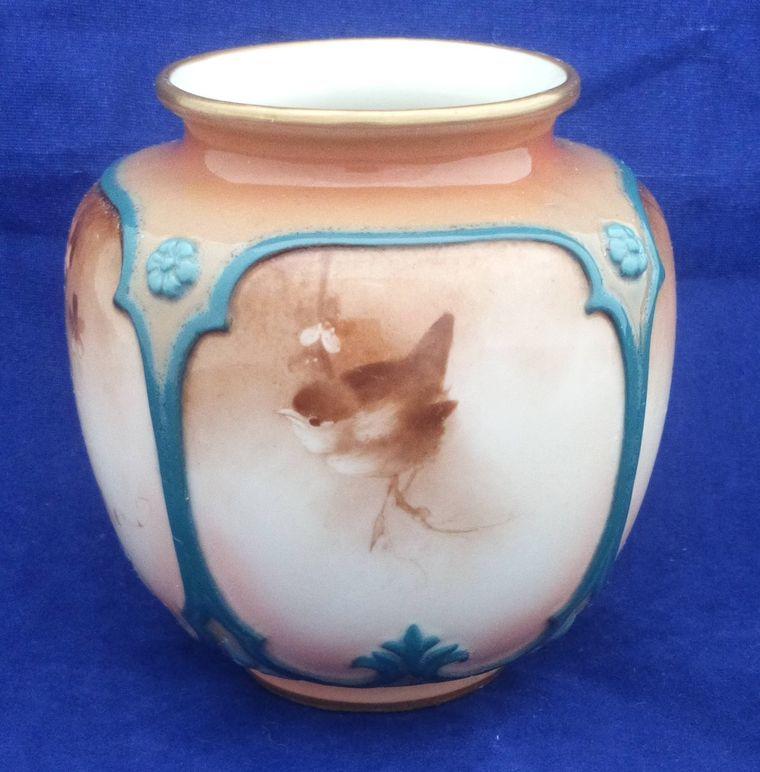 A very pretty and decorative example of a hand painted James Hadley and Sons Worcester porcelain vase dating from February 1897 until June 1900.

This beautiful little round shaped slip moulded vase is marked on the base with the Hadley mark that was used between these dates and the name "Faience" and Worcester England.  See Godden's Encyclopedia of British Pottery and Porcelain Marks number 1871 page 300. There are also hand painted numbers to the base 162 / 13, we think the number 162 refers to the shape and the 13 the pattern number. The vase has an aesthetic movement influenced design with a Moorish look with the low relief panelling and jewelled rosette detail.

The colour palette is most attractive with a graduated brown or sepia background and turquoise highlights, with gilding to the rim and foot rim. It has been beautifully hand painted with a subtle design of birds and blossom.

It really is a delightful piece by a renowned, high quality maker and would make a great addition to any collection of English late 19th century vases, hand painted decoration or antique Worcester porcelain.

James Hadley (1837 - 1903) was apprenticed to Kerr & Binns of Worcester in the 1850s. He worked in the modelling department and in 1870 had become the principal modeller at Royal Worcester porcelain. He left the Worcester factory in 1875 to set up his own modelling studio at 95 High Street, Worcester providing models under contract to his previous employer.

In 1895 Royal Worcester cancelled James Hadleys contract due to a drastic drop in the demand for elaborate luxury goods. So Hadley then rented some factory space from his old friend Edward Locke, who had set up his own works at Shrub Hill, Worcester.

Then In 1897 with the support of partner Frank Littledale, Hadley started to build a factory in Diglis Road, Worcester using land owned by his family. When complete, early production concentrated on decorative art pottery with monochrome decoration, as in the example on offer here, and also terracotta plaques. The factory wares were made using coloured clay mouldings in dark blue, green and brown which distinguished them from similar objects made by the Royal Worcester factory.

Free UK postage with this item. International delivery at cost.

Condition: It is in very good antique condition, has no chips, cracks nor restoration There is a short hairline to the glaze on the base and a tiny scratch to the brown enamel above the branch to the left of the right facing bird. Please see the images.