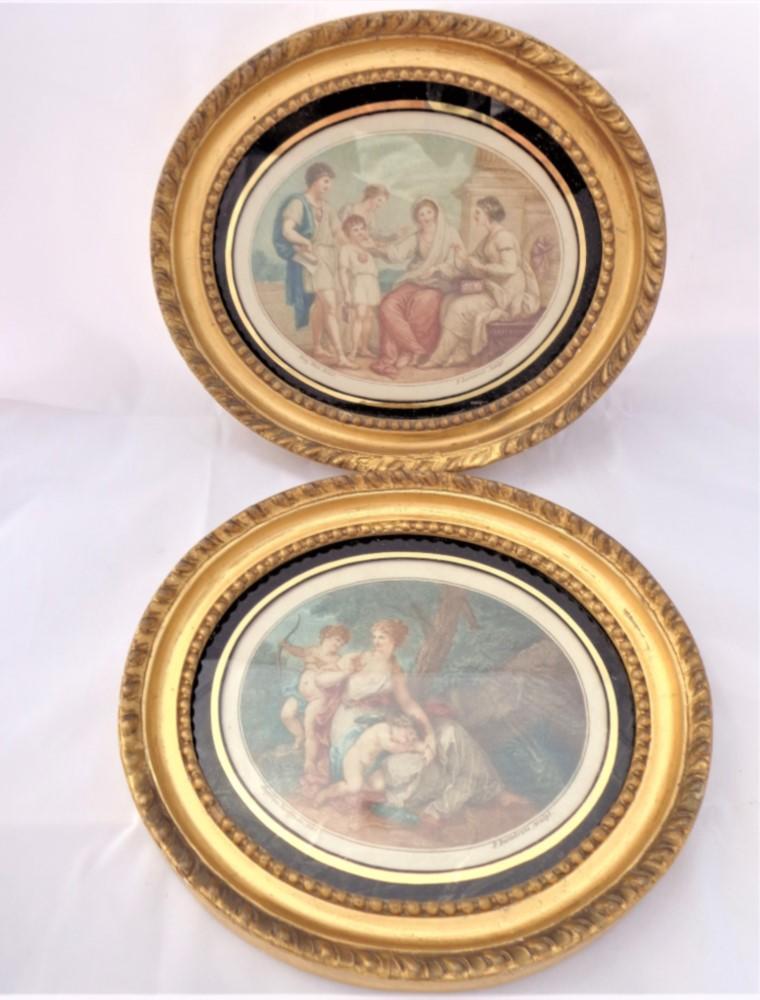 Francesco Bartolozzi RA (1727-1815) was an Italian, the son of a goldsmith, Bartolozzi studied painting in Florence, trained as an engraver in Venice and began his career in Rome. In 1763 Richard Dalton, art dealer and librarian to George III, met him and invited him to London, promising him a post as engraver to the king. Bartolozzi moved to London the following year and remained for thirty-five years. He executed numerous engravings for the King. He also made many engravings of paintings by Italian masters and by his friend, the painter Giovanni Cipriani. In 1768 Bartolozzi was the only engraver to become a founder member of the Royal Academy of Arts. He moved to Lisbon in 1802 as director of the National Academy.

The first print of this pair is of a painting by Benjamin West PRA (1738-1820), he was President of the Royal Academy 1792 - 1805. The title of the painting is Cornelia, Mother of the Gracchi, shewing her children as her only ornaments. Published 10 November 1783 by Anthony Poggi. Another copy of this engraving is in the Royal Academy collection item number 08/4565, which can be viewed online.

The Gracchi were the two brothers, Gaius Sempronius Gracchus (154–121 BC) and Tiberius Sempronius Gracchus, who were Roman Popularis politicians in the 2nd century BC. Their father, Tiberius Gracchus the Elder, was a powerful man in Roman politics throughout the 2nd century BC. Their mother was Cornelia Africana, daughter of Scipio Africanus, a noble woman who was a major influence on the Gracchi; as a widow, she refused the marriage proposal of Ptolemy VIII, the King of Egypt, preferring to devote her life to the upbringing of her sons.

The second picture is by Angelica Kauffman or more accurately, Maria Anna Angelika Kauffmann RA (30 October 1741 – 5 November 1807). She was a Swiss Neoclassical painter who had a successful career in London and Rome. Remembered primarily as a history painter, Kauffmann was a skilled portraitist, landscape and decoration painter. She was one of the two female founding members of the Royal Academy in London in 1768.

This painting is titled Cupid sleeping on a woman's lap, also known as "Love Sleeps" Published by Anthony Poggi, St. George's Row, November 10th 1783.  Venus seated signing silence to a young child with a bow while Cupid sleeps, his head resting of her knee.

The frames are identical and each measure 8 1/4 inches wide by 7 1/4 inches high. The visible print is 5 inches wide. Each frame is glazed with a black and gilt border to the frame. Each print is as originally framed and with the titled attached to the back. They weigh 594 grammes unpacked.

They are in excellent antique condition.The prints area all original, untouched in original frames, although there are some old minor repairs to the gilded plasterwork on the frames.

These are a great pair of antique prints and ideal for collectors of the works of the Francesco Bartolozzi, Angelica Kauffman or Benjamin West.

If you would like to see further images of this item please message us.