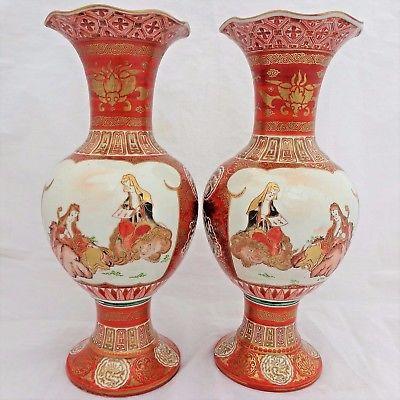 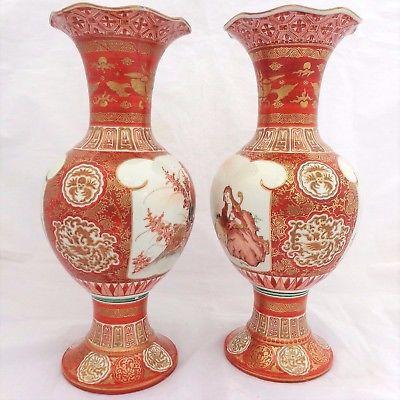 The vases which are 14 1/2 inches high are of footed baluster form with wavy or pie crust trumpet neck and have been finely hand painted in enamels with profuse gilding. The main design structure is painted with two large main ornately shaped cartouches on opposing sides. The space between the cartouches is filled with iron red enamel with gilding in cloud scrolls, stylised gilded dragons, flaming pearls, HoHo birds, FengHuang or Chinese Pheonix.

The cartouches on each vase, one side has a scene of a cockerel keeping watch whilst two small birds possibly love birds feed on the ground. They are each on small mounds that look like mini volcanoes, not dissimilar to Mount Fuji in shape.

The other side has two Japanese figures in traditional clothing each have their heads covered with gilt head-dresses and have a red dot on their foreheads, an urna or byakugō, 白毫, an auspicious buddhist mark symbolising the third eye, symbolic of vision into the divine world. One is sat on a rock and is holding a ruyi sceptre the other is reading a scroll whilst sat on the back of a recumbant komainu or guardian lion (foo dog).

The vases are each marked in iron red enamel on the base 大日本九谷製 , Dai Nippon Kutani sei , which translates as Great Japan Kutani Made. Kutani-yaki is a type of ware sometimes known as  再興九谷 saikō-Kutani made in the nine valleys in the Hyōgo Province, on the island of Honshu, Japan. These vases dates from the mid to late 19th century and from the Meiji period (1868-1912) .

The vases are approximately 14 1/2 inches high, 6 inches diameter at the widest and  the base is 5 inches diameter. They  weigh 3562 grammes unpacked.

One is in excellent antique condition with no chips nor restoration, it has a small short 1/2" hairline to the rim, there is some glaze crazing. The other has been broken at the rim and repaired small chip to rim and a small flake to the green enamel at the joint between the body and foot.  Please see the photographs and description.

These are a highly collectable and decorative items and great for display on their own or as part of a collection antique Japanese porcelain or Kutani-yaki.