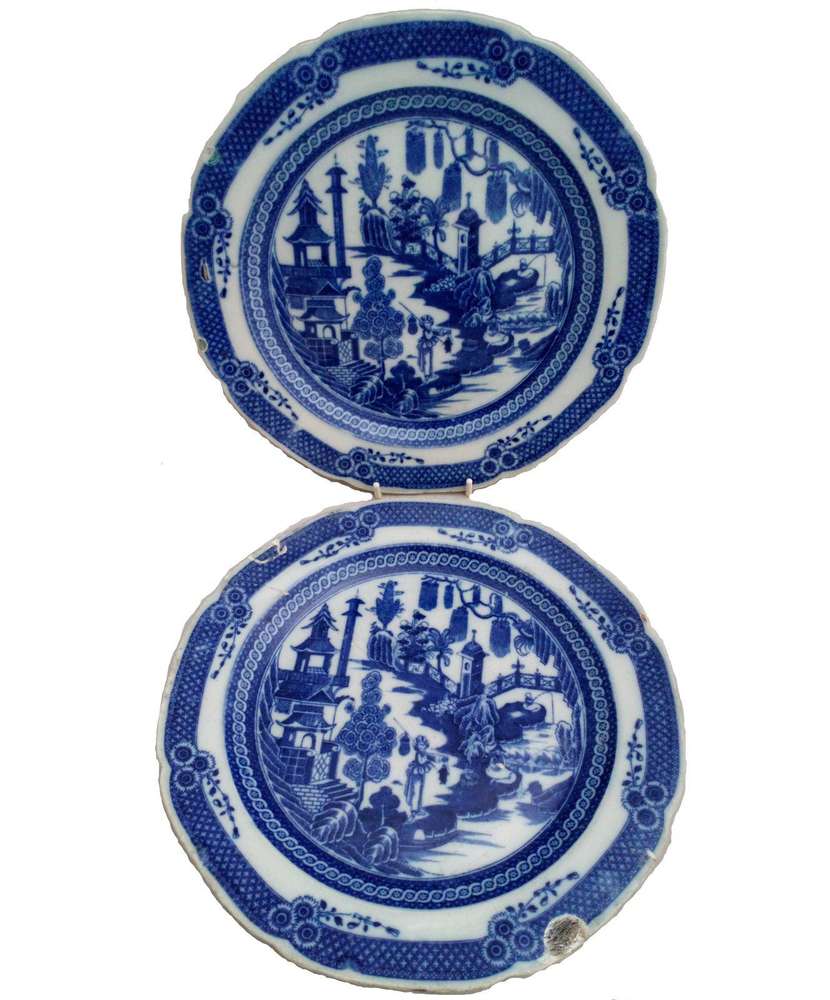 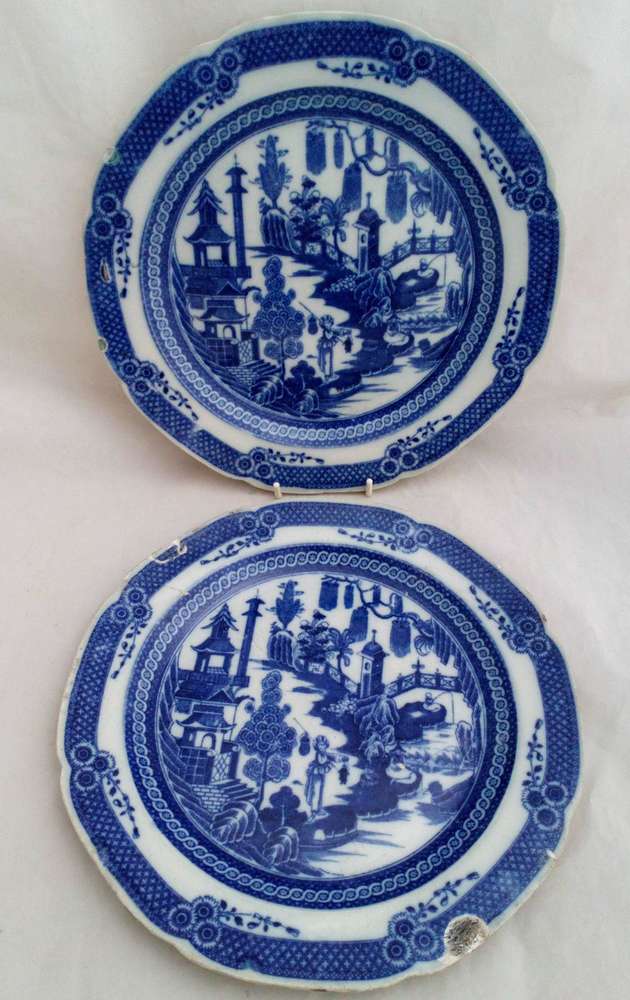 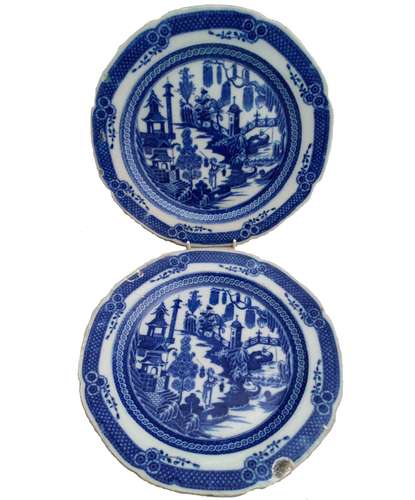 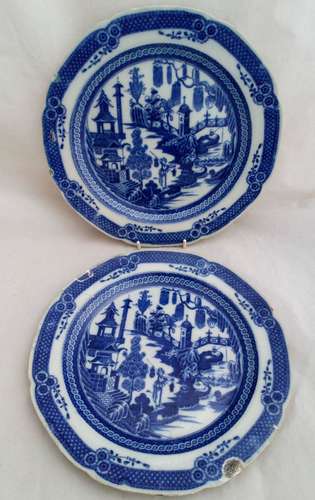 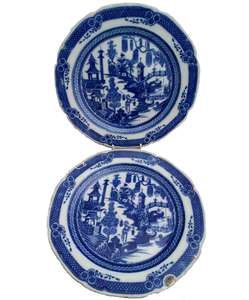 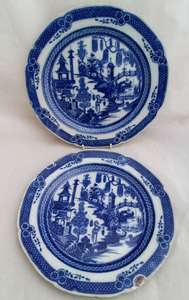 A pair of antique Davenport blue and white transfer printed octagonal indented pearlware plates showing the relatively unusual Chinoiserie pattern, Chinese Fishermen or Fishing Family. They date to the late 18th century to early 19th century, the late Georgian period circa 1795 to 1810 when George III was on the throne.

This interesting pattern has a main focal point in the foreground of a tall thin standing figure on the bank of a river, he is holding up a fish and has a long pole which across his right shoulder, the pole has a basket or fishing net hanging from it. He is wearing a strange turban-esque striped hat and also has an unusual similarly decorated waist band. There are two other figures who are also fishing. There are a number of Chinese style buildings one has a tall thin minaret like tower and an ornate bridge with a domed square shaped tower to the visible end. There are a number of other Chinoiserie elements including long hanging willow blossom and hanging rocks but the most unusual one is a flowering cactus growing form the top of a rock in the upper left side of the pattern.  The plates have a floral and diaper cell border.

Davenport operated from their factory in Longport, Stoke on Trent, Staffordshire, England from 1793 until 1887.

The plates are 9 3/4 inches in diameter and weigh a total of 829 grammes unpacked.

The plates are in fair antique condition, one has two chips to the rim the other has been broken into three pieces and glued back together. Minor nicks to the rim. Please see the images.

True Blue; Transfer Printed Earthenware Edited by Gaye Blake Roberts An identical example of this pattern is shown in case ll/1, p. 66 and p. 108, with a Davenport mark. 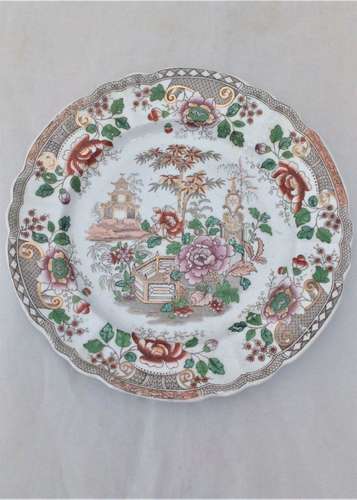 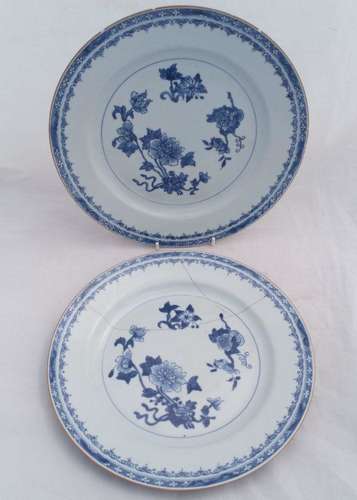 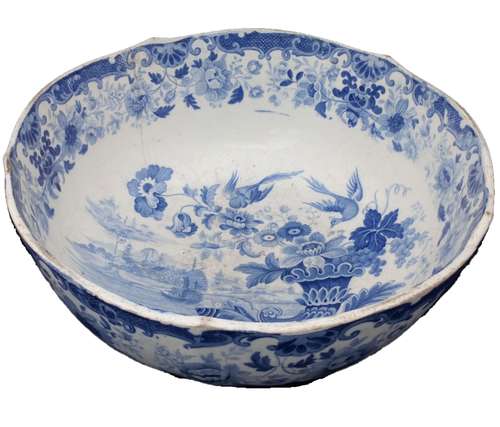 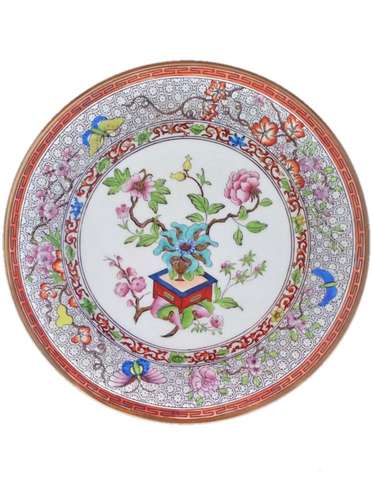